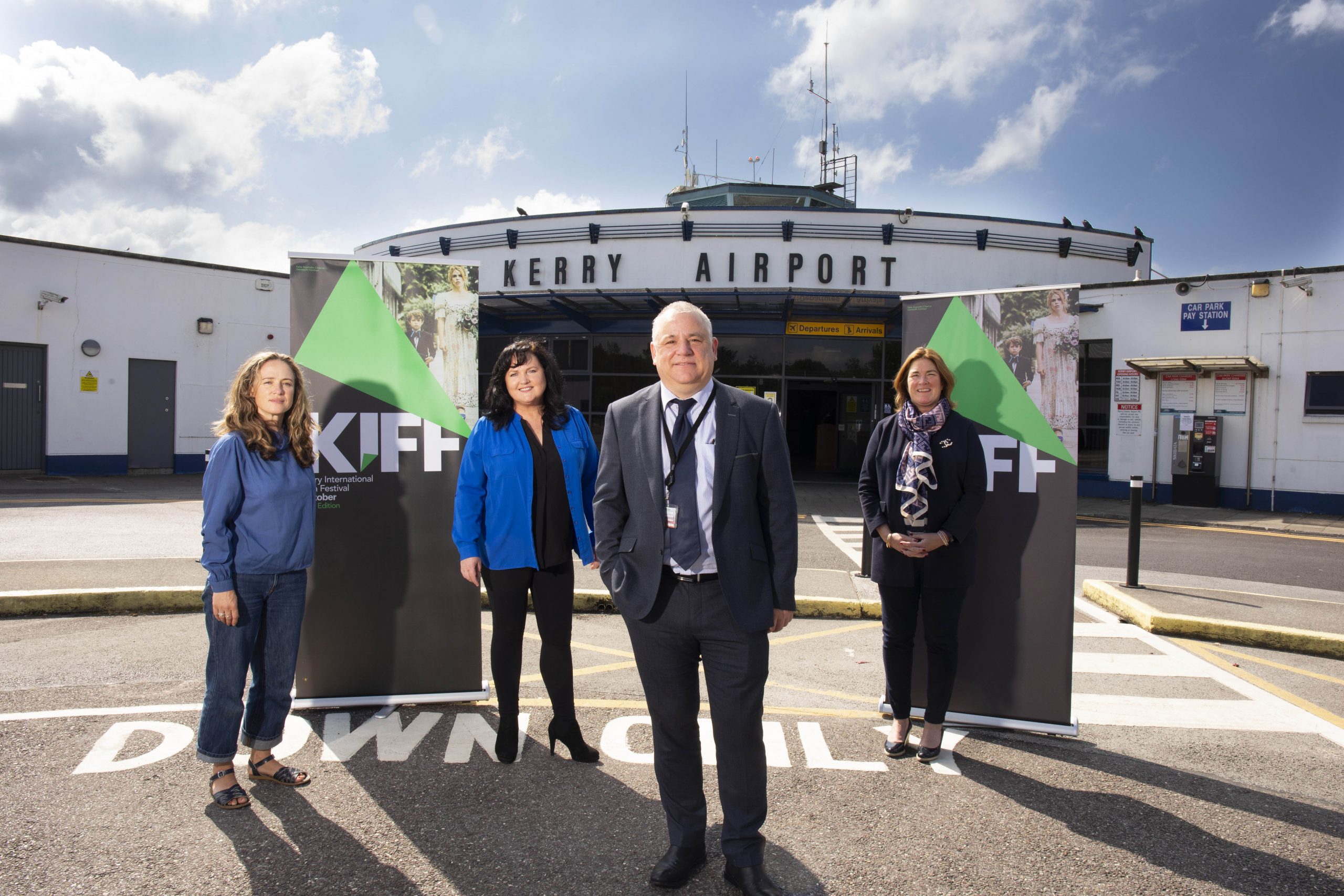 Kerry International Film Festival (KIFF) are delighted to announce their exciting new headline sponsor partnership with Kerry Airport. Running for its 22nd year, the festival will take place October 14 – 17 2021 and this new partnership has provided a significant boost for the festival. A common goal of both Kerry Airport and KIFF is the promotion of Kerry on a global scale, and this has played a significant role in the development of this collaboration.

Speaking at the launch of the partnership, CEO of Kerry Airport, John Mulhern said “The Kerry International Film Festival is a highlight of any calendar. The benevolent and lasting relationship between the arts and County Kerry is one which is acclaimed all over the globe. In particular, the film industry. Remember when Jimmy Stewarts’ Charles Lindbergh finally spots land, Skellig Michael and the Iveragh Peninsula, a historic event in aviation and experienced by us all through the wonders of Film. Thus, how could Kerry Airport resist the opportunity to partner with KIFF and with them celebrate both renowned and emerging talent in their craft. We look forward to October with much anticipation”.

To celebrate Kerry Airports invaluable support, KIFF have introduced The Kerry Airport Take Flight Award. This award will recognise up and coming new talent in the film industry and is a welcome addition to the festivals coveted awards, which also includes The Maureen O’ Hara Award, The Best of Kerry award, The Best Irish Narrative Feature award, amongst others.

Speaking about the partnership, Board Chairperson, Grace O’ Donnell, said: “The team at KIFF are very excited about the collaboration with Kerry Airport.  We see this as a natural progressive partnership.  For most of our visitors to the festival, stepping off the plane at Kerry Airport is their first taste of Kerry.  Kerry Airport is the gateway to Kerry and we feel KIFF is the gateway to film in the County.  We look forward to working with CEO of Kerry Airport John Mulhern along with his team at the airport to make KIFF one of the most important film festivals in the World and to continuously support Kerry as a destination.”

Script writer and Kerry native, Ailbhe Keogan is also a board member of KIFF. Her latest script Joyride, featuring Oscar winning actress Olivia Coleman was recently filmed in Kerry this summer with some scenes being filmed in Kerry Airport. Speaking about the importance of Kerry Airport from a film maker’s perspective, Ailbhe said: “Personally, as a film-maker, I’ve been grateful to Kerry Airport for many years now. I’ve travelled abroad to make important connections and brought these collaborators home to Kerry. Partnering with Kerry Airport enables KIFF to do likewise; to make meaningful connections with an international film community so that we can offer the richest festival we can”.

KIFF is going from strength to strength despite the challenges that came with Covid 19. Last year the festival went exclusively online due to Covid restrictions, as a result KIFF gained over 17,000+ live streams throughout the four days of the festival. Additionally, KIFF is included in the top 100 film festivals in the world where it has gained a 5-star rating and they are Ireland’s fourth biggest festival. This year, KIFF 2021 were delighted to receive the highest number of submissions in the festival’s history.

Working hard alongside Cinema Killarney and several invaluable local businesses and sponsors, KIFF is hugely appreciative of the support and goodwill they receive from the people of Kerry and strive to deliver a state-of-the-art festival that supports and promotes both industry talent and local engagement.

KIFF’s new partnership with Kerry Airport has made a massive difference to the festival and they are looking forward to exciting times ahead. Áine Moriarty, CEO of the Irish Film & Television Academy (IFTA) and KIFF Board member said: “We have a wealth of creative talent here in Kerry and we want to ensure that they have every opportunity to grow and succeed internationally.  The filmmaking industry in Ireland has become an important business for the Irish economy, KIFF and Kerry Airport can together showcase the filmmaking talent and stunning scenery our wonderful country has to offer.