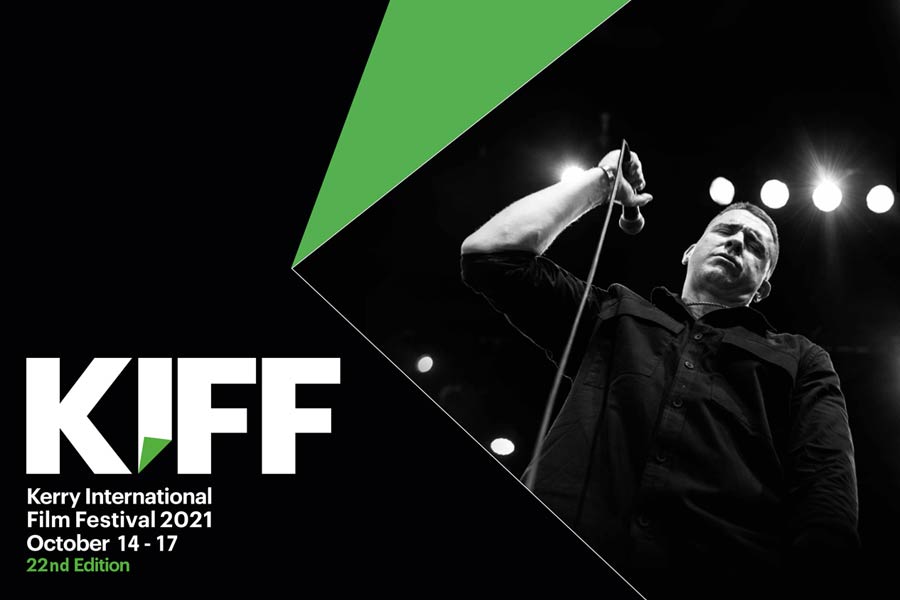 Kerry International Film Festival (KIFF) are delighted to officially launch their 2021 film festival programme today, 01 October 2021. Celebrating its 22nd edition, this year’s festival will take place 14 – 17 October 2021 and will present a blended film festival that promotes and showcases film and filmmaking talent across 15 in person physical events and 30 online screenings.

Speaking at the launch Eibh Collins, Festival Director said ‘We are delighted to be able to bring KIFF back onto the big screen with Cinema Killarney as our main venue. We are also thrilled to be returning to Tralee for our closing night film, which will screen at Siamsa Tíre. Running parallel to the in-person programme, we have a robust and exciting online programme streamed from the KIFF website to audiences’ devices-of-choice. KIFF endeavors to ensure that those who cannot travel, or those who are not yet ready for travel in the current phase of the pandemic, will still be able to enjoy the best of Kerry International Film Festival from the comfort of their own homes.’

In advance of the festival, we are proud to present our 2021 Maureen O’Hara winner, with a special ‘In Conversation’ interview with eight-time Academy Award-nominated film producer and president of Lucasfilm, Kathleen Kennedy (ET: The Extra Terrestrial, Indiana Jones, Star Wars). Kennedy oversaw the rebirth of the Star Wars Universe including the most recent trilogy which showcased Kerry to legions of film fans the world over. This event will be hosted by producer Rebecca Flanagan (Smother, Handsome Devil) and will be available to watch online from Oct 11th.

The festival will open on Thursday 14th October with Death of a Ladies’ Man, starring Gabriel Byrne, and will close with the Irish Language feature Foscadh (Shelter), which recently won Best First Feature at the Galway Film Fleadh. Foscadh was also recently selected by the Irish Film & Television Academy (IFTA) as Ireland’s entry to the Oscars® Best International Feature Film category for the upcoming 94th annual Academy Awards.

Alongside these in-person cinema screenings, KIFF has an exciting selection of New Irish Shorts Feature Films’ and Documentaries, including the Damien Dempsey-centered Love Yourself Today, Tadhg O’ Sullivan’s, Dublin International Film Festival-winning, To The Moon and dramatic documentary features Who we Love & The Yellow Wallpaper.

Some of the online programme highlights include KIFF’s three new themed strands. The ‘Something’s Not Quite Right’ Strand, KIFF’s Environmental strand presented by Irish actor Jack Reynor, and KIFF’s All Abilities strand.

Indie and low-budget filmmaking is something KIFF strives to support. With the DIY filmmaking community growing fast whilst showcasing some of the best new and emerging Irish filmmaking talent, KIFF is excited to take this opportunity to highlight a spooky developing trend and to showcase some of the new talent in this area. Thus, KIFF will be presenting Something’s Not Quite Right, a series of screenings showcasing this genre that includes a selection of horror and psychological thrillers, including Irish & Irish-US co-production The Yellow Wallpaper, Bring out the Fear, Save me from Everything and Gateway.

We are excited to announce that Irish actor Jack Reynor is KIFF’s newly appointed Green Ambassador. In celebration of Jack’s role, he and the programming team have put together a daily online selection of international environmental documentaries that highlight the challenges our environment faces today, including Hell or Clean Water (Canada), Uni Yama Aida (Japan) and Walk the Tide Line (Finland).

Amongst these highlights is a film programme to celebrate our new All Abilities submission field, dedicated to promoting the lives, stories and artistic expression of people with different abilities and disabilities. This selection includes Irish and International fiction and documentary shorts and the feature documentary Only I Can Hear.

As always, Kerry Talent is the star of the show, as we have two programmes of Kerry Connection short films and we are honoured to support Kerry writer Katie McNiece’s Feature Who We Love, directed and co-written by Festival alumni Graham Cantwell.

These films and more will be in the running for the prestigious KIFF Awards. The winners will be announced on Sunday 17 October at the KIFF Awards Brunch in the wonderful setting of J.M. Reidy’s Killarney.

KIFF has gone from strength to strength over the past 12 months as they gained over 17,000+ live streams during their online festival in 2020 and recently generated the largest number of film submissions in the festival’s history to date.

KIFF was delighted to recently announce Kerry Airport as its title sponsor for 2021 and they are very grateful to be working with them alongside other key partners including The Arts Council, Kerry County Council, The Irish Film and Television Academy (IFTA), Randles Hotel Killarney, RTÉ Supporting the Arts, The Plaza Hotel Killarney, Tower Records, Kerry Broadband, J.M. Reidy’s as well as a wealth of local Kerry businesses.

All of this and so much more can be found on our website. Tickets, pre-booking and festival passes will be available to purchase from 6pm on Friday 1st October from https://kerryinternationalfilmfestival.eventive.org/welcome